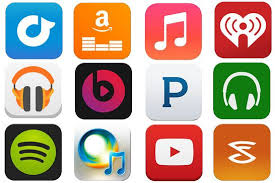 Hello everyone and welcome back to Crmnigeria!

Music is life. Obviously everyone has that song, album, playlist or track that they can’t help but jam to, it’s just apparent. While some of us download songs from websites, others prefer to stream the latest songs and albums directly from apps and even download it from there. So today I bring to you the top 5 rated music streaming apps for Android users.
ALSO READ: ENJOY STREAMING LIVE FOOTBALL MATCHES
1. APPLE MUSIC:
Apple music isn’t only for iPhone users! There is also an android version that let’s everyone enjoy the music content. Apple Music came initially onto the world late in 2015 to quite an array of mixed reviews. Despite that, it has quickly risen to become one of the best music streaming apps out there. It features more 30 million songs along with curated playlists, a 24/7 live radio station, and you can also upload your own music and stream it to your device.
It also comes with a social part of the app where you can follow numerous artists and see what they’re up to. It runs on a variety of monthly plans, including a cheap student plan, individual plans and a family plan that supports up to six family members. It seems to compensate for its lack of features for an availability in many countries where many of these other services aren’t available. Students users of the app get a 50% discount ($4.99 per month) while family plans max out at $14.99 per month. That’s extremely competitive pricing.
2. DEEZER:
Deezer has been known for its ups and downs but it’s still one of the more respectable music streaming services. It offers an array of features, including, stations, playlists, song recommendations, and a personal soundtrack feature called Flow. It boasts of about 43 million songs in more countries than many of its streaming app competitors. Undoubtedly the best feature is a Hi-Fi streaming option with 16-bit FLAC quality for a subscription of $19.99 per month. There is also a free version that can be downloaded on Google play store.
3. iHeartRadio:
Ever heard of the iHeartRadio music awards?? They have quite a reputation in the music world and their streaming app doesn’t disappoint. iHeartRadio is definitely a long time favorite. It is rated among the best platforms when it comes to curated playlists and radio stations. There is also a premium on-demand music service loaded with millions of tracks. Its radio selections are far better than most other streaming apps. The $4.99 version adds on-demand music playback while $9.99 adds a bunch of extra features. In my opinion, iHeartRadio will always be a champion of the free radio station market, though.
4. PANDORA:
Pandora is one of the most recognizable music streaming apps ever launched. It’s available on a ton of platforms and even some cars. There are mainly two Pandora experiences. The first is a radio station-only service that grants you the ability to skip tracks and give a thumbs up or down on a track or playlist to show if you like something in particular. The second is a full on-demand streaming service music similar to Spotify, Apple Music, etc. Of course, the full on-demand service (at $9.99 per month) includes all of the features of free Pandora app as well.
5. SOUNDCLOUD:
The popularity of SoundCloud can’t be overestimated. It is yet another extremely popular music streaming service. A lot of people upload their own stuff to SoundCloud for the listening pleasure of others. SoundCloud’s on-demand service, known as SoundCloud Go, adds tens of millions of popular tracks to the mix. The total is over 150 million available tracks for $9.99 per month. That’s the second largest collection of music (Google Play Music and YouTube Red together technically have more). This is a great spot for discovering indie stuff and new tracks that no one else knows much about. Additionally, the service includes the usual features like playlists, stations, and other discovery features.
So what do you think of this list?? Drop a comment for suggestions!
SEE ALSO  COURTROOM FILES LAWSUIT AGAINST YOUTUBE FOR RACISM

How To Build Your Marital Home | Ways To Grow Your Marriage

How to create an Android app on smartphone and start earning