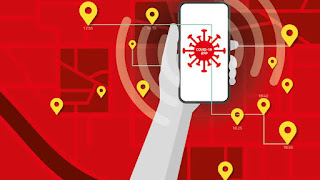 Good day everyone and welcome back to Crmnigeria.

As many of us know, numerous countries are working on COVID-19 tracking apps to curb the strenuous tasks of physical contact tracing for the coronavirus and it turns out the citizens of Japan are very anxious about the launch of the app.
ALSO CHECK OUT: YOUTUBE SET TO TEST SHORT TIKTOK-LIKE VIDEO FEATURE
The COVID-19 contact-tracing app launched in Japan last week has been downloaded more than 4 million times, as the government seeks ways to ward off a presumed second wave of coronavirus infections now that schools and businesses have fully reopened.
Yasuyuki Sahara, the health minister of Japan confirmed while there was no target number for downloading the app, “we want to make as many people as possible to use this app”.
Apps like this may be able to halt a pandemic if usage reaches 60 percent of the population of the country, according to a study in the Oxford University.
Yuki Furuse, a professor at Kyoto University, Japan, said emphasized on the fact that there’s a debate about whether the usage of the app has to be that high for its function to be effective, but “the more people use the app, the more it would be effective for the outbreak response.”
Japan lifted its lock down and a state of emergency in late in May and the country has experienced the pandemic better than most developed countries, with almost 18,000 infections and 969 deaths.
The app, named COCOA, which stands for” Contact-Confirming Application”, was designed by tech company Microsoft and is available now for Apple’s iPhone and devices using Google’s Android software.
It is said to use Bluetooth signals to detect contact with nearby users lasting for about 15 minutes or more. If a user of the app later tests positive for the virus, their contacts can be traced and notified through the app.
Numerous countries have rolled out contact-tracing apps, including Australia, Britain, Malaysia, Italy, India, and Germany.
Also in Nigeria, a new COVID-19 program has been installed into every Android phones. To access it, simply go to Settings, then Google Settings, where “COVID-19 Exposure Notifications can be seen”. Thank me later…
Don’t forget to drop a comment below!
SEE ALSO  HOW TO EARN FREE $100 (N39,000) FROM CLIPCLAPS APP

WhatsApp 30 Seconds-Limit for Video Status is back!

Complete Guide on How to Get access to a Locked Phone

How to create a PayPal account that sends and Receives Payment without VPN or IP related stuffs in Nigeria 2020.